Backgrounding Techniques in Cinema and Literature

“In his later works, Klee began to erase the lines that typically distinguish a painting’s foreground image from its background, and he populated this background with numerous other figures that enter into a viewer’s awareness to greater and lesser degrees. Thus Klee’s late works… paint the usually inconspicuous tension of emerging and withdrawing, the usually unnoticed opposition of foreground and background which allows painting to work.”

Room 237 is a documentary covering fan theories that have surfaced around Stanley Kubrick’s The Shining. Costume design, background posters, and the brand logos of pictured food items all receive thorough readings from the documentary’s featured fan theorists, who see each as a crucial clue to the movie’s “real” plot or theme. What struck me most, when watching Room 237, was how different, rather than similar, this world of film fan theory felt from literary interpretation.

I’ve been trying, in grappling with this difference, to get a hold on what I mean by four terms. These are: foreground, background, signal, and noise.

Foreground and background seem fairly straightforward. The foreground in an artwork is that which most immediately commands the attention and sensory focus of the viewer. This viewer can choose to redirect his attention away from the work’s foreground, but this constitutes an active experiential choice rather than a passive default. In visual fields, whatever is nearest to the observing POV is traditionally considered foreground, but I’m using the term here more flexibly, in a way that allows exceptions to this rule — if, for example, objects closest to the viewer are blurred in a large-aperture, distant-focus shots. Here, the object in focus is in the foreground because it is being emphasized, and commands the viewer’s passive attention. The nearer objects, meanwhile, sink into the background.

Signal and noise are harder to pin down, but the essential quality of a signal seems to be that it conveys or relays a communication from director to audience. Noise is intended to relay little or nothing. (Even if, ultimately, all sense perception carries information.)

Signals are designed with an audience structure of inference in mind, to lead to certain inferential leaps and assumptions (about, say, a character or artistic tradition or our contemporary society). In much of film and television, the “something” pointed to will frequently be plot or theme-related. In modern and postmodern visual art, the something is often formal or cultural.

All four terms of these terms exist on a gradient instead of binary, but centrally, foregrounding is technique for focusing viewer attention within the frame, whereas signals point towards happenings outside the frame.

In the case of set and costume design, intra-work logic, real-world fidelity, and visual appeal-slash-interestingness are often dominant drivers of creative decisions. And while all of these are important functions of art elements, they often have more to do with “fleshing out” than with communicating a greater meaning. Tellingly, the aforementioned roles (costume and set design) are largely delegated out by most directors. There are exceptions, cases in which directorial guidance is quite strong and focused—indeed, this is precisely the point we are coming to—but as a general rule, few viewers will notice or remember the color of blinds, and the dress of character will tend to reinforce, rather than significantly advance, our understanding of him.

This also isn’t to dispute the fact that every component in an artistic work conveys something. If one is engaging in a gender critique of a movie, the color of a set extra’s dress may be indelibly important. But a director likely isn’t intentionally communicating something critical to plot or theme with it. Everything is a signifier, but only some objects have been purposefully built to signify the director’s intended meaning. I have no interest in arguing that intended meanings are “truer” or more important — though it’s questionable whether the premise of an authentic or “intrinsically supreme” meaning is coherent to begin with. Instead I want to make two descriptive claims: 1) That directors have intended themes and plots which they include (and frequently emphasize, or foreground) in a work, and 2) That because of this emphasizing, as well as the norms of pre-collegiate literary education, there is significant overlap between the themes and plots which viewers look for in art experiences and those which the director/art author intends them to.

In other words, directors include signals and audiences look for them. The work of art is, among many other functions and ontologies, a medium of communication, a way for a director to point.

Where does noise fit within this configuration? Elements of noise are interchangeable or even replaceable without significant damage to the intended communication. Were we to remove them, we would possibly have an even clearer conception of the work’s plot and themes, though of course then the works would cease to be art and would read as Cliff’s Notes. (This is interesting: that noise turns signals into art.)

Often, many noisy components of a work, when taken in amalgam or abstracted up, constitute a signal. Perhaps the specific brand of a character’s deodorant is for the director’s purposes interchangeable, but the fact that it is prominently and recognizably branded is not: he has the money to forgo generics, the director is letting us know. So it may be more accurate to say that qualities of things, as much or more than the things themselves, constitute noise.

These are messy and relative definitions, but required in order to make the arguments I’m attempting to advance about film, literature, and medium. One of these arguments has almost already been established in the definitions above: that signals are typically placed in the foreground of a work and noise in the background. The second, now, is that directors frequently “hide” signals by tucking them both into the background and among noisy elements. Directors do, for instance, often get intimately involved in the design of certain sets or costumes, placing what we and them would consider crucial details of plot and theme in plain but backgrounded site. For a strange and unknowable reason, this hiding of signals is an almost universally prized trait in critical assessments of works.

The third argument is that a prerequisite of this specific type of signal concealment is the presence of multiple sensory dimensions, or of multiple details or events occurring simultaneously in the work. In this way we can see that literature is “flatter” than film. Signals-in-hiding cannot be tucked literally behind other signals in the same way that they can in film. Two things cannot show themselves literally at once; instead, the work plods ahead one word at a time. Nor does literature have the same debt to comprehensive veracity that film has. A film scene in a pantry room must, unless otherwise explained away, include fully stocked shelves. Each shelf and stocked item has the potential to carry thematic or narrative weight, to be, in other words, a signal. (We can call this opportunity the subtlety of the optional in the necessary.) A literary scene does not carry such an obligation; details are offered voluntarily, most are left out, and those which are included have a higher probability of being important, hence their inclusion. Indeed, novels do not have many obligations at all in this cultural moment, a liberation which brings with it limitations.

None of this is to deny equivalences between mediums. While almost every word is volunteered and created by the author of a text, subtextual and linguistic double-meaning is one way to “layer” a literary work akin to cinema. Frequently, important signals are “buried” textually in seemingly noisy descriptive paragraphs, paragraphs which are themselves an analogue to the cinematic backdrop. It is even possible to write in a way that a reader skims over such paragraphs, ignorant of their secrets. Literary filler serves the important job of bulking out a text, allowing readers to “sit” in a world or plot point in a way film, with its tight financial and time constraints cannot, so literature’s temporal fleshing-out can be understood as a counterpart to cinema’s spatial fleshing-out.

From Barthes’s The Pleasure of the Text:

Yet the most classical narrative (a novel by Zola or Balzac or Dickens or Tolstoy) bears within it a sort of diluted tmesis: we do not read everything with the same intensity of reading; a rhythm is established, casual, unconcerned with the integrity of the text; our very avidity for knowledge impels us to skim or to skip certain passages (anticipated as “boring”) in order to get more quickly to the warmer parts of the anecdote (which are always its articulations: whatever furthers the solution of the riddle, the revelation of fate): we boldly skip (no one is watching) descriptions, explanations, analyses, conversations… it does not occur at the level of the structure of languages but only at the moment of their consumption; the author cannot predict tmesis: he cannot choose to write what will not be read. And yet: it is the very rhythm is read and what is not read that creates the pleasure of the great narratives: has anyone ever read Proust, Balzac, War and Peace, word for word?

(There are other limitations to literature, or abilities of cinema. One is consistent presence, or what we might call background residuality. Audiences of all mediums are forgetful. In film, things which are true in the continuous sense/tense remain present so long as they are on-screen. A character’s blackness will be on-screen to some extent whether or not the director wishes to place viewer focus on it. This, along with the very real possibility that the casting choice is incidental to theme or plot, makes us unsure whether the director is pointing or not, whether we are seeing part of a signal or mostly noise. There is an ambiguity of intent. Since audiences look where directors point, this ambiguity matters, if not intrinsically at least in consequence.

In a literary work, it is easy for the reader to forget such descriptive details. If a side character’s blackness is slipped into a brief physical description at the start of an interaction, it won’t move interpretation to the extent that television is capable of. If the author reminds, makes a fuss about a particular detail, the ruse is up, the intention is known. Ambiguity and its elegance disappear.)

My guess is it is not incidental that the same people (critics, academics, connoisseurs) who prize signal-noise ambiguities also have qualms with 1) the prioritization of directorial/authorial intent, and 2) “preachy” or “sermonizing” works. My guess is that this kind of ambiguity amounts to a director including a detail which he considers vitally important, and then disguising it in such a way that the audience must figure out its relative importance for themselves. The subtlety of a signal in turn reflects a subtlety of intent, allowing viewers to “figure out for themselves” from the provided source material rather than being lectured at.

Two more explanations arise from the conceptual carving of foreground/background, signal/noise. One is that since hierarchies of foreground and background are central to our ordinary perceptual organization, their interrogation is in itself an important function of art. Escher’s tessellations, or the grounding reversals of Citizen Kane, actively challenge established visual hierarchies. Literary shifts in perspective penetrate the foregrounding effect of subjectivity.

A second explanation is hinted at in the following graphic courtesy of Giffiths and Tenenbaum’s “From Mere Coincidences to Meaningful Discoveries.” The zone of “suspicious coincidence” is also, for an audience, the zone of intrigue, where anything can be a red herring or Chekhov’s Gun. It’s where interpretive viewing gets interesting, and possibility appears endless: 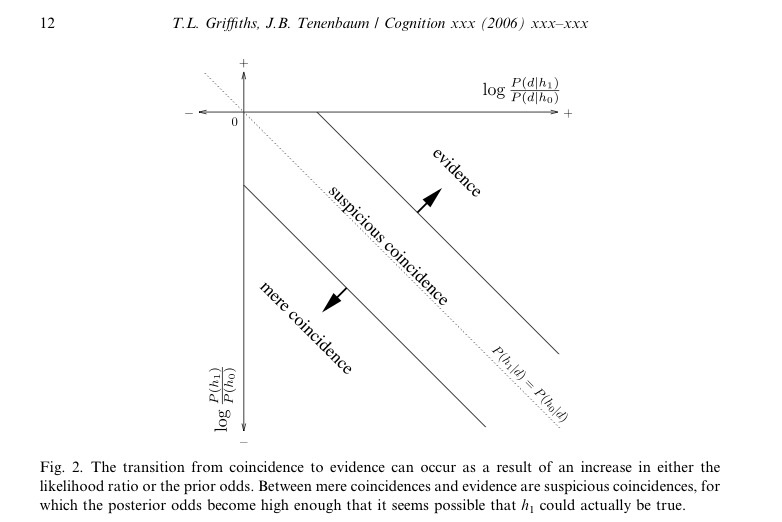 One response to “Backgrounding Techniques in Cinema and Literature”