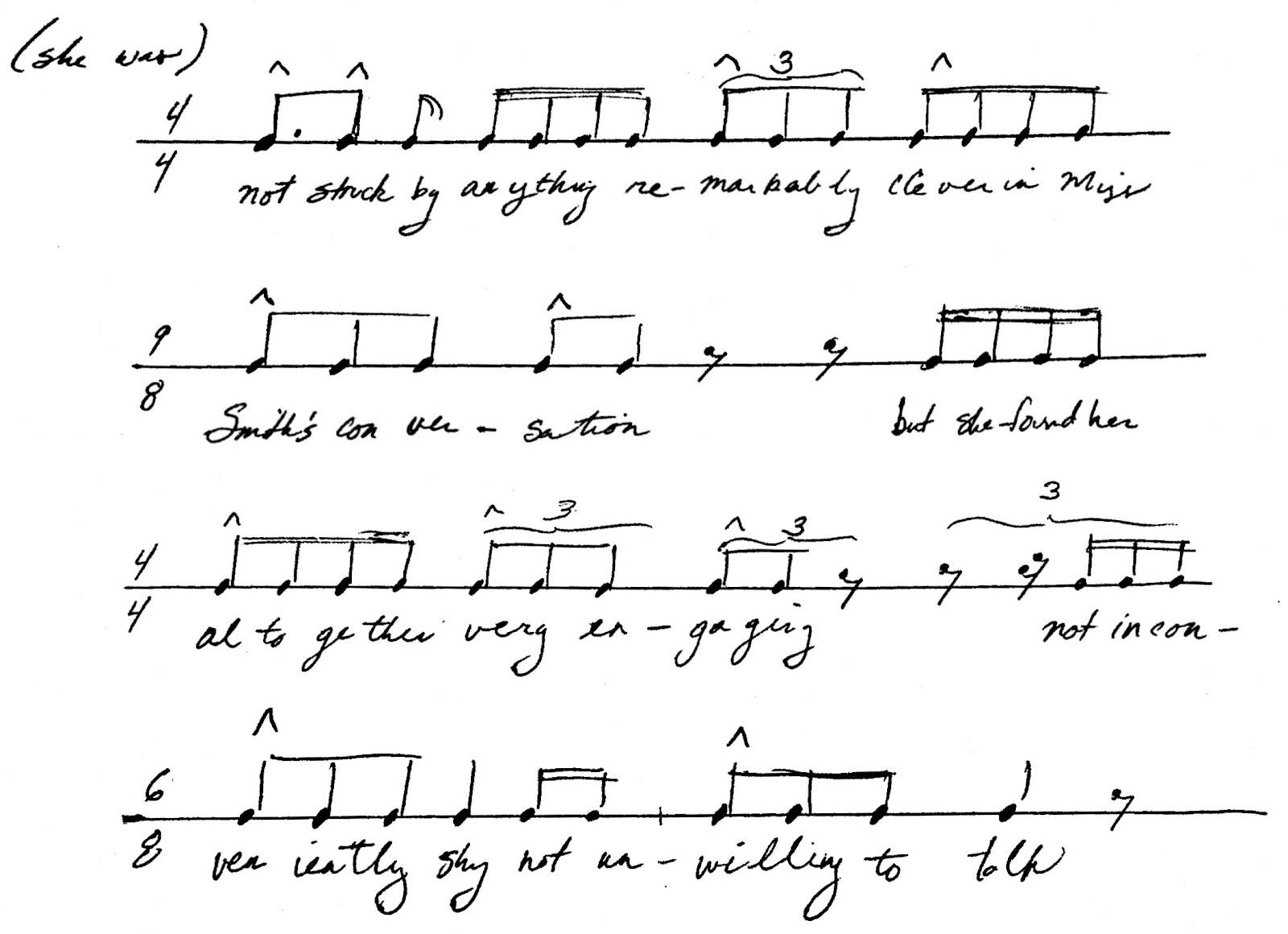 Above: the opening lines to excerpt. “She was” acts rhythmically as a pick-up or poetic pre-head. Stressed syllables are marked with a caret as is standard in musical notation.

Below: the rhythm demonstrated non-musically, divided into feet, with the stressed syllable bolded; the time switches between straight and lilting, between four and three (or binary and tertiary).

She was not struck by any thing remarkably clever in Miss Smith’s conversation, but she found her altogether very engaging—not inconveniently shy, not unwilling to talk—and yet so far from pushing, shewing so proper and becoming a deference, seeming so pleasantly grateful for being admitted to Hartfield, and so artlessly impressed by the appearance of every thing in so superior a style to what she had been used to, that she must have good sense, and deserve encouragement. Encouragement should be given. Those soft blue eyes, and all those natural graces, should not be wasted on the inferior society of Highbury and its connexions.

Rhetorician Fred Scott divides writing into what he dubs the “motative” and “nutative” styles. Nutative writing, as its name implies, has a rhythm which nods; it was, contemporaneous with Austen, synonymous with verse and poetry. Motative writing, meanwhile, moves: Scott describes it as having the rhythm of the tides, moving shore-ward with each successive rising and falling wave, then receding back again in a similar fashion. It is writing which has climaxes and troughs but which bases its dynamicism on  content. (Pound’s distinction between the “musical” and the “metronomic” comes to mind.) Motative writing is primarily communicative; it encompasses the essay, the argument, the novel — essentially, prose writing.

Emma‘s prose blurs this delineation, slipping in and out of meter. Austen suspends her emphases, hanging them loosely over the beat instead of precisely on top of it, occasionally verging on quasi-syncopation. “Struck,” for instance  (from the excerpt) is stressed, but comes a sixteenth ahead of the second beat; “clever” arguably a hair before the fourth (though not marked as such: the displacement is almost too slight to be notated). As a result, each even-numbered stress — “struck” (2) and “cle-” (4) — is spaced more closely to the preceding odd-numbered stress — “not” (1) and “-mar-” (3) than it is its successive odd-numbered stress. The result is the feeling of, if not a nod, a steady gallop.

Communication may be its central motivation, then, as Scott would argue, but a communication both informational and emotional, resembling the thrupled marriage of topic, take, and delivery to be found in the speaking style of Hartfield’s resident gossip. The evocation’s furthered by the presence of a narrator who is both omniscient and — to put it in the understating, double-negation style of Austen — not entirely disinterested in events. Nor this narrator disinterested in the success of her own storytelling, which, with its rhythmic form, prioritizes in equal measure content and delivery. With its rhythmic sensibility and variety (note, for example, the switching between duplets and triplets, of emphasis and meter), the syntax, even free of its signifying, is entertaining in its own right.

As for the excerpt’s non-rhythmic syntactic choices: testing the text against elements of, say, the Prague School’s Functional Sentence Perspective (FSP) theory yields useful insights. If we are to divide the graf’s sentences into themes (defined as known or given subjects) and rhemes (any unknown or new information regarding subjects), an intelligible pattern emerges from the clausal/informational ordering: In the very first sentence of the paragraph, we note that Emma’s initial impression of Harriet — as basic & unremarkable — is placed at the sentence’s start; while this is new information for a first-time reader, it is presented anyways as if taken for granted, as an obvious or predictable known. The clause which immediately succeeds it and overwrites or “updates” it, meanwhile — “but [Emma] found her altogether engaging” (with the qualifying “but” emphasized) — is an elaborative rheme, an unknown which comes as at much the surprise of the novel’s reader as it does its protagonist. And yet such “surprize” — on the part of Emma, at least — is far from an isolated behavioral pattern: she is similarly taken off-guard later in the book when the working class Mr. Martin writes a proposal letter at a level “much above her expectation.” This syntactic choice by Austen, and the behavioral pattern which it mirrors (or “syntactically symbolizes,” loosely), builds and develops a certain condescending or or “lowballing” element to her heroine’s personality — though one which is open, rather than closed, to contradiction.